Zero uses a belt for primary transmission of torque to the rear wheel. It's quiet and lightweight but is a proprietary design that can wear out. If you plan to put a lot of miles on a Zero or risk the belt often, buy a spare belt ahead of time and mind its maintenance.

Drive belts fail by snapping or by stripping the teeth.

On Landing
The most common situation for a belt snap is when going over a major bump or jump where the rear wheel leaves the ground.

From Debris
Gravel or sand that gets thrown between sprocket teeth and the belt will force the belt to expand quickly under load, and can cause it to snap.
Reportedly, sand is a much more reliable path to belt failure than gravel.
The sprocket tooth design is meant to deflect gravel to the inside of the swingarm towards the wheel.
The bike has an upper debris guard made of soft ABS plastic, but does not have a lower guard.

From Mis-Alignment
An unaligned belt can wear really badly and break sooner.

Generally, watch for belt damage and try to anticipate when to replace the belt to avoid an incident on the road where the belt snaps.

Tension with aging
Apparently, per forum user JaimeC, belts don't wear like chains.
As they get older they'll actually get tighter, not looser like a chain.
Since the Kevlar belt on the outer circumference won't stretch, the inner circumference will shrink making the belt tighter around the sprockets.
Generally, you want to make sure the belt hasn't gotten any tighter since you brought it home.

Bumps
Belts are most commonly damaged by using the throttle in the moment that a wheel becomes airborne, over a bump at speed, say.
If the wheel spins up momentum in the air, regaining traction on landing will jerk the belt, causing a loss of belt teeth or the belt may snap entirely.

Debris
Gravel, road debris, or sand can damage or snap the belt if caught between the belt and the sprocket.
Sand seems to be the most sure to destroy a belt; gravel has a lower probability given some basic design protections that should scatter gravel out of or away from the sprocket.

Teeth loss tolerance
Missing belt teeth can be tolerated briefly until a replacement can be made by riding at low torques (easy acceleration, not too high sustained speeds).
The front sprocket has up to 28 total teeth, and only half of those can be in contact with the belt at any given moment, so a continuous sequence of stripped belt teeth might continue up to perhaps 12 but any length of missing teeth is riskier as it gets longer.
The teeth and inner surface of the belt can melt into the front sprocket if the sprocket slides where there are not teeth
If the front sprocket slides, the front sprocket will go fast and it will take out additional teeth as the wheel catches up
Eventually you will have to remove material from the front sprocket or replace it. And eventually the belt will break and you will be unable to climb a San Francisco hill (does this sound oddly specific?)
Scraping out the material with metal can damage the sprocket. Avoid it. A hardwood dowel or a polycarbonate rod, sharpened, is better. Acrylic is too weak. 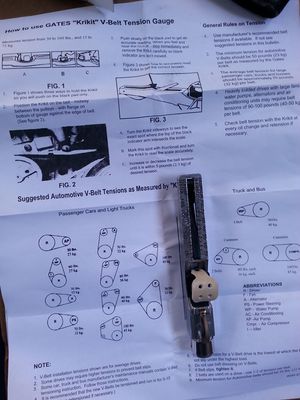 Improvement
Because this procedure is not trivial to perform consistently, there is a modification to make the tension gauge easier to align

The frequency can also be checked with instrument tuning apps such as Tuner-gStrings for Android.