Difference between revisions of "Rear Shock"

Zero motorcycle models use a single shock absorber rear suspension, joining the Swingarm to the Frame.

On Gen2 models, the rear shock fastens to the Swingarm by an M10 bolt.

On SDS Platform models, the upper mount reaches the frame centertube ahead of the controller heatsink area so is difficult to access.

This is a stub for removing the Rear Shock.

The rear shocks on Zero models are spring shocks, a common construction for many motorcycle models.
2013-2014 models feature a FastAce shock. 2015+ models have a Showa shock.
Access from the bottom is hampered by the controller heatsink on SDS Platform models, so access from the top is required. 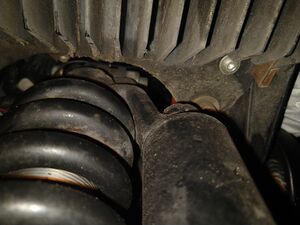 Access to upper bolt from the bottom is hard 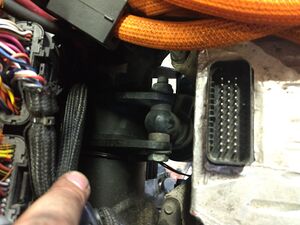 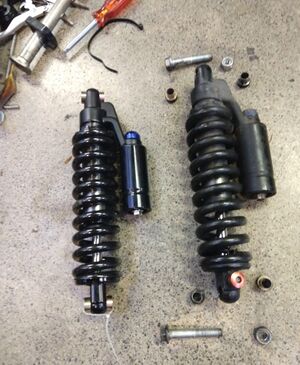 Compression
The official manual's description here is adequate and this can be done readily by hand on the right side of the bike at the top of the shock.
Rebound
The adjustment knob is at the bottom of the shock facing rear, as described in the manual, and can be worked by hand or with a wrench with a careful reach into that area.
Spring Preload
The official manual illustrates the collar and procedure for spring preload adjustment, but does not recommend a specific tool, and there are clearance issues in that area for tools.
The adjuster sleeve diameter is 58mm (2.3").
A Stockton spanner wrench was found to be suitable for the job if modified as follows (per 2017 DSR Showa rear shock spanner wrench):
Obviously, a better solution is still worth seeking.
A small suspension wrench / ER collet spanner size 30/32 can be use even with the lack of clearance 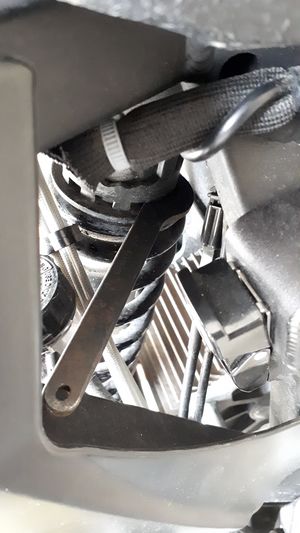 Suspension wrench around the collar