The swingarm is a dual-sided structure made in the same way as the frame. It's very sturdily constructed for its light weight. 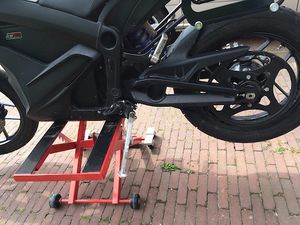 The front pivots on the axis of the motor to minimize belt strain with suspension travel.

It has fitments for the rear axle including belt tension adjustment.

Mounting
The swingarm joins the frame at left and right pivot points.
The each side pivot has a stack of (from outside inward):

There is a hollow tube through the swingarm across the arms forming a join point for the rear shock to the frame tube on the SDS platform. 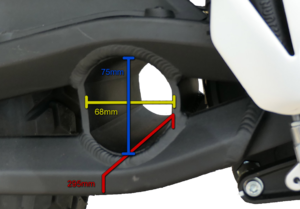 Its shape is flattened on the rear side, presumably to clear the largest-diameter potential tire.
It makes a reasonable storage tube if some padding or caps are used to secure the cargo there (like a charging cord).

Steps
NOTE: For roadside removal, particularly for an FX or FXS, setting the bike on its side should be possible for this work.

However, no effective procedure has been described for the process.

The following steps are suited to garage locations.