The Koso XR-SR is a generic/whitelabel instrument gauge cluster, used on 2008-2011 model years. 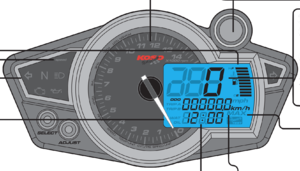 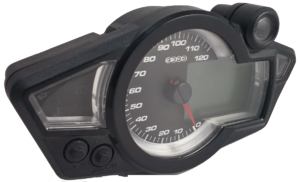 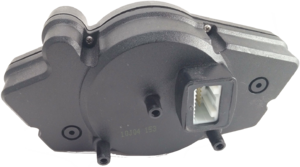 Features
Zero's RX-1N shows battery level in 11 increments.
It's relatively effective to treat each increment as representing 9% of charge state, and do a little mental math to figure out that each increment could represent 6-12 miles (for say 2013), and work out the remaining range / speed tradeoff from that.
The Koso instructions linked below show how to operate it.

Connections
Koso connectors are much simpler than Zero's connectors to its own custom dash.

Interchanging them would be a significant project.

In 2014, Zero introduced their own LCD instrument cluster AKA "dash" for all models (S and X platforms). 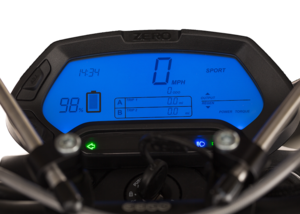 Changes
The new gauge changed the pin connector and relies on specific CANbus messaging, so there's no simple way to install one on an older model.
It offers an ergonomic advantage that the instrument cluster no longer obstructs access to the keyed ignition and steering lock.
The state of charge reading is now primarily numeric as a two-digit percentage, with a (effectively) continuous bar level reading next to it.
Zero's Official Owners Manual explains its capabilities pretty well. 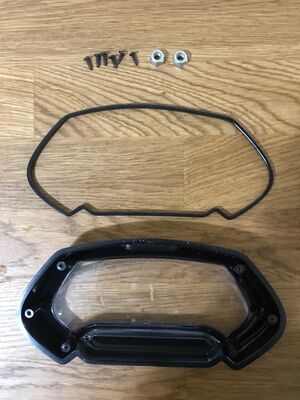 Instrument cluster enclosure front with fasteners
This instrument cluster is enclosed by a plastic housing, with the back half fastened into the front.
The enclosure is fastened by 6 black-finished Philips-head (PH1) machine screws at the rear.
The halves are joined with a rubbery gasket along the edge in a little baffle zone to impede ingress by moisture and dust.
Internals 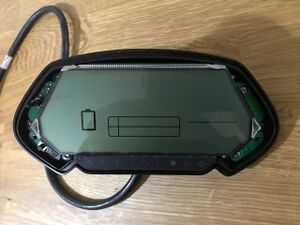 Instrument cluster board uncovered
Within the enclosure, the board is fastened to the rear plastic half by 4 Philips-head (PH1) machine screws.
The board's front consists almost entirely of the LCD substrate with no protection - the protective acrylic screen is part of the front half of the plastic enclosure.
The LCD is connected to the circuitry on the rear of the board by pins along the top edge. 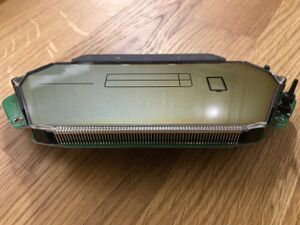 Instrument cluster board connectors
Two connectors at the rear of the board join the circuitry to the signaling interface with the rest of the bike (via CANBus).
The connectors are fastened with a simple clip.
The cable entering the rear of the enclosure is fastened to it by a simple plastic clip and a Philips-head (PH1) machine screw.
Removing the cable should first involve unclipping the board connectors before loosening the screw holding the cable clip.